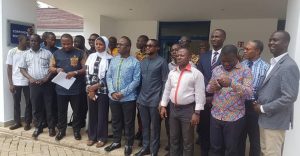 The Executive Director of Center for Extractives and Development Africa (CEDA) Mr. Emmanuel Kuyole has expressed misgivings about capping the percentage of mineral royalties to mining communities by the Central Government.

What is even worse according to the CEDA boss is the delay in disbursing what he called the meager 20 percent to the communities involved thereby delaying developmental projects in those areas.

Addressing journalists at a training workshop on the Mining Development Fund, Mr. Kuyole who has been a strong advocate for a higher percentage of the fund to mining communities could not fathom how any government would cap an already meager percentage and delay the disbursement as well.

He, therefore, challenged Ghanaians to test the law on the capping of MDF in an attempt to stop the Minister of Finance from continuously capping the MDF to mining communities.

“Government has said they support mining communities, so on that note, one can argue in court that capping the MDF defeats their attempt to develop those communities hence the court should remove MDF from the list of funds which are capped so that money can flow to the mining communities”. He explained

The training was aimed at informing journalists in the Ashanti region about the Minerals Development Fund and to enhance their reportage on the sector.

The Chief Executive Officer (CEO) of the Ghana Chamber of Mines Mr. Sulemanu Koney said the passage of the Minerals Development Fund Act(2016) -Act 912, has complemented the corporate Social Investment Initiatives, Trust Funds and other developmental Foundations initiated by the mining companies for their host communities.

He noted that development does not occur in a vacuum calling on Ghanaians to join hands with mining communities, the Chamber of Mines and government to ensure prompt development of mining areas.

“ We can get a sustainable outcome from mining depending on how we manage the mining industry, hence our call for all Ghanaians’ hands to be on deck”. He rallied.

He reiterated the need for the MDF to be increased to about 30 percent for affected communities to have more to enable them to plan their development agenda very well.

He revealed that though the law on MDF was passed in 2016, the tenets of the law are now being applied.

According to the Chamber of Mines CEO, the most vital part of the MDF and its efficient use is Monitoring and Evaluation, an attitude most firms and sectors lack in Ghana.

The administrator of the MDF Secretariat Dr. Norris Hammah mentioned some challenges of the MDF including the composition of Board, unclear descriptions of certain terminologies and an imprecise portion of the MDF act.

The Ghana Chamber of Mines has parried blame over the underdevelopment of mining communities in Ghana, saying the government must respond to the situation.

The Ghana Chamber contends that despite the meagre percentage of disbursement of the mineral royalty to the communities by the central government, the royalties are always in arrears depriving the beneficiary mining communities of development.

The Chief Executive Officer of Ghana Chamber of Mines, Sulemanu Koney explained in a meeting with the Eastern Regional Minister Eric Kwakye Darfuor in Koforidua on Tuesday that, the proportion of the total royalty which goes directly to the mining districts represent only 4.95% of all mineral royalty payments by the mining companies.

He further highlighted that in 2016 for instance, mining companies in the country paid mineral royalty of Ghc550 million to Government but only GHC27 million will be returned to the mining district assemblies for development, describing the disbursement as “woefully inadequate for the stimulation of meaningful infrastructural development in the mining communities”.

The CEO of the Ghana Chamber of Mines added that the passage of the Minerals Development Fund Act(2016) -Act 912, will complement the corporate Social Investment Initiatives, Trust Funds and other developmental Foundations initiated by the mining companies for their host communities.

He, however, emphasized the need for Ghana to enact a Mineral Revenue Management Act to deepen transparency and accountability while providing opportunities to residents in mining communities to apply mineral revenue to the most critical areas of their communities.

Minister unhappy with the insignificant contribution of the mining industry

The Eastern Regional Minister, Eric Kwakye Darfuor did not mince words when he stated that Mining Communities and for that matter, Ghana has not benefited meaningfully from the gold mining industry considering the quantity of gold deposits extracted from Ghana.

He said with the exception of few mining firms like Newmont Akyem Mines developing their operational areas in the region, most of the mining companies do not care about initiating support programs for their host communities.

He said the situation reflects the underdevelopment in most mining communities in Ghana creating public disenchantment over mining activities in the country.

Eric Kwakye Darfour, therefore, called on the mining companies to collaborate with their host communities to support them with developmental initiatives.

The reaction by CEO of the Chamber of Mines
But in a reaction, the CEO of Ghana Chamber of Mines Sulemanu Koney explained that with exception of 2015, the mining industry in Ghana has been the highest revenue contributor to the economy in the last five years of which a total of Ghc1.6 billion was paid to the government as direct revenue.

He said, apart from this, the mining sector is providing job and business opportunities for local companies in the service supply chain.

He added that the mining sector is currently Ghana’s leading source of export earnings which in 2016 accounted for 46% of gross merchandized exports. 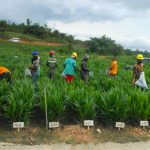 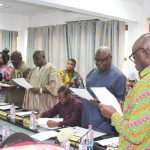