The Chairman of the Minerals Development Fund (MDF) Board, Kwaku Sakyi-Addo, has urged local management committees (LMCs) in the mining districts to strictly adhere to the transparent and accountable systems put in place in the guidelines for utilisation of funds disbursed to them for development projects.

He stressed that in applying the fund, the LMCs must bear in mind that the MDF was set up primarily to provide infrastructure and other initiatives that would improve the lives of residents of mining communities.

“The MDF is not private fund; it is not any school association fund; it is fund that originates from mining companies who pay royalties to the government, a portion of which, guided by law, is to return to mining communities for development projects in to improve lives, so it has to be utilised transparently and accounted for diligently,” he stressed.

He made the call during the inauguration of a seven-member LMC for the Mpohor District in the Western Region last Tuesday.

The LMC was inaugurated in compliance with the provisions of Section 19 of the Minerals Development Fund Act, 2016 (Act 912), to administer and operate the Mining Community Development Schemes (MCDS).

Per the Act, the membership of the LMC are the Chief Executive of the Metropolitan, Municipal or District Assembly (MMDA) of the mining area for which the LMC has been established; traditional rulers of the mining community, one representative each of the district office of the Minerals Commission and each mining company, and identifiable women and youth groups.

The Mpohor LMC is chaired by an opinion leader in the area, Matthew Ekow Assan.

Mr Sakyi-Addo, who was leading the MDF board on a four-day tour of projects being executed in mining communities, underscored the need for LMCs to prioritise projects that would make more impact on the people.

He observed that apart from education, health and sanitation projects that were often undertaken by LMCs, it was important for them to explore investment opportunities in economic ventures that would provide sustainable income.

After inspecting some projects that had been undertaken by the Ellembelle LMC, he said he was impressed with the quality of work done.

He added that the impact of the projects demonstrated that the MDF was relevant for improving lives in mining communities.

For his part, the DCE said the inauguration of the Mpohor LMC would be a major boost for the district’s quest to fill the development gap that existed in education, health, sanitation and other sectors.

He observed that although the district was largely a mining area, it had not benefited from MDF because there was no LMC.

The Member of Parliament (MP) for Mpohor, John Kobina Abbam Aboah, also said the inauguration of the LMC would pave the way for the people to benefit from the minerals that were extracted from the area.

He urged the committee members to put the interest of the district above parochial interests in the discharge of their duties. 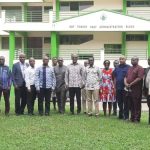 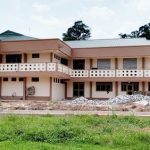