The government is to distribute four million hybrid oil palm seedlings to farmers and persons who hitherto were engaged in illegal mining across the country in support of the Green Ghana Project.

The seedlings are to be planted in degraded mining sites nationwide as part of measures to restore forest cover in the country.

The seedlings were raised by the Richie Plantation Limited on its plantations at Akwatiakwaso in the Akuapem North Municipality of the Eastern Region, and Dunkwa On-Offinso in the Central Region under the auspices of the MLNR.

The project is also targeted at supporting the government’s Alternative Development Livelihood Programme to offer alternative sources of income for people who were once engaged in illegal mining.

It is being funded by the Minerals Development Fund.

We’re not against small-scale mining

Launching the initiative at a ceremony at Akwatiakwaso on Wednesday, May 26, 2021, the Lands and Natural Resources Minister, Samuel Jinapor, said the government is not against small-scale mining, but rather illegal small-scale mining that destroys forest reserves and water bodies.

“Our country was once called Gold Coast, so the government cannot stand opposed to the mining of our gold, but the government is vehemently and palpably against illegal small-scale mining that destroys our environment, and we will do whatever it takes to stop it,” he said.

He stated that unlike in the past when the people could fetch clean water from various water bodies, today they could not do so since many sources of water are heavily polluted with mercury and cyanide due to illegal mining.

“Today, major rivers such as River Offin in the Central Region, Pra in the Western Region and others in southern Ghana, are literally destroyed due to galamsey. Now, Ghana Water Company has to use a huge amount to purchase chemicals to treat water sourced from these rivers to make them drinkable,” he said and appealed to the chiefs to back the government to win the fight against galamsey.

In a bid to reverse the alarming rate of forest depletion in the country, Mr. Jinapor said the government had set aside June 11 this year for the planting of five million trees in Ghana.

The exercise, he said, would see the President, the Speaker of Parliament, the Chief Justice, the Asantehene and other dignitaries planting trees to support the initiative.

“We will plant and nurture economic trees such as Rosewood and timber to restore depleted forest covers, and we want to conscientize the society and the nation on the importance of tree planting.

“Coming this Friday, the Minister of Education and I will launch a programme, dubbed One Student One Tree at the Accra High School, and we will ensure that on June 11 every school will have each student planting one tree,” he said.

He added that: “This will inculcate the spirit of ownership and the habit of tree planting to allow the people to appreciate the value of trees and forest cover.”

The Chief Executive Officer of Richie Plantation Limited, Mr. Richard Ekow Quansah, said he established the plantation in 2005 with the aim to help increase green cover and protect aquatic life in the country.

“I vowed to complement the government’s effort to implement various green initiatives, and I am happy this has become a reality today. I am glad this project is also providing alternative livelihood for the youth to stay away from galamsey, and I am paying their social security and giving them free launch and accommodation. This is what I am committed to helping the country with,” he said.

He was glad that a partnership between the government and individuals like Mr. Richard would help to protect and preserve the environment. 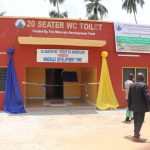 COMMISSIONING OF 20-SEATER CAPACITY WC TOILET FACILITY WITH SHOWER FOR THE PEOPLE OF AKROFUOM ADANSI IN THE ASHANTI REGION. 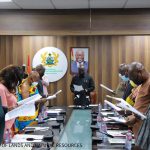